Attention! Attention! Did you ever know that your name in Luhya land could determine the part of kuku you would be served with? I think you should know.

I say so because soon and very soon, I will be forwarding my papers to the AG because I am thinking of divorcing bachelorhood. I am aware some of you may decide to partner with your cerebral cortex and catch Alfred Mutua’s feelings if I will not welcome you to the land flowing with chai, kuku and unga. I therefore welcome you in advance to have a bite of not a kuku Chinese or kuku bonoko reared in Nairobi but a natural ingokho. Somebody may ask me of the actual date I am planning to become enemies with Arsene Wenger and the boys we share seats with in football stadiums.  Put differently, once one crosses over into familyhood, watching football becomes a crime. Anyway, it shall actually come to pass at God’s appointed time.
Getting back to business, I savvy that most of you have only been In western  through the social media. You will therefore think of the bitter sugar saga or Man Weta locking horns with the bullfighter. Others will visualize the struggling AFC Leopards or the mortal jehovah Wanyonyi. My friends in school will envisage ladies endowed with natural masigwembe harvesting corn or governor Lusaka’s wheelbarrows.
That aside, there is an aspect in this land flowing with tea and unga ya kushaga that people are yet to decipher. After making a very important step of visiting this land where Wamalwa Kijana was born, you will infact realize that the man wasn’t known as Kijana. The people knew him as Kichana. This forced me to do some silent analysis of names and my findings were amazing. Now that I am planning to welcome you into this good land, I think it would be good for you to realize that you will have to change your names immediately you step on our fertile soils. The name your Mama Alice decided to tag you with shall tell who you are and shall correspondingly determine the part of the hen you shall be served with.

Most of you have known me as Benjamin son of this good mum called Alice. You are right but when you find me seated with Nyukuri senior and some uncles beside me, call me Penjo for them to understand, otherwise they may wonder who Benja is. As the firstborn, I am entitled to savor the gizzard when the Senior is not around. Otherwise, the back of the hen also known as kumukongo has always been mine.
Getting to you my good friend Getrude, beware that Keturuutaa shall be your new baptismal name without any affidavit. The Keturuuta in our village is a lady known to be hyperactive. I mean she has that rare talent where she is a jack of all trades and a master of none. If there are games during Chrismas celebrations, she does participate in all games and even has that audacity to compete with men! Politically, she is the women representative in the elders meeting. Therefore, this name is respected and Keturuuta, expect to be served with the breast of the hen that shall be slaughtered.
For the likes of Mohammed, am sorry to announce to you in advance that Muwamati  shall be your name when you come to celebrate my crossing over. Villagers believe baisilamu are good at slaughtering cows. In regard Muwamati should expect a chicken thigh as a sign of honour. When you come across somebody trying to find out who Furechi is, don’t hesitate to raise up your hand if your mum decided to call you Fred. Furechi is a name tagged with fighting so don’t be surprised if you’ll be served with the neck.
Esiteri is another baptismal name granted to anyone known as Esther in the city. It is a name for mama kanisa thus you will be served with the liver. Mangirita or Makuruweti on the other hand is a special name for good people who decided not to be referred to with any other name except Margaret. Mangirita was an old lady known to take upto four jugs of tea on one sitting even in very important meetings like funerals or weddings. This is viewed as a disgrace to women. Thus, my friend Margaret, expect to be served with the intestines.
Bush is a nice name in the global West but come to Kenya West, it shall evolve to Pushi. One very important aspect with such names like Pushi and Wasama Pini Lateni is that they are also considered to be names of dogs. If you therefore go by such a name, be notified that Mama Alice shall not  be that mean to chase you from the kitchen when she vibrates mightily while cursing pushi . She will be exiting our dog from the kitchen instead. On that note, Pushi and Wasama shall have to feast on chicken legs because such names are not honoured.
Grace on the other hand shall be baptised with Kuresi. If you think you’re smart enough to also insist that Neema is your other name, our cow has already been tagged by it. You will have to humbly share that name with a cow. Mothers love cows so much so my good friend Neema shall in turn be served with the breast.

Festus doesn’t exist at our place. Instead we have Fuwesito. People possessing such names are well known to be drunkards so brother Festus, make sure you gotea my mum with a ‘Bwana asifiwe mama’ for you not to be associated with the legacy of that name. Otherwise, a chicken wing shall be served for you and I insist that it shall be a chicken wing and not wings.
Also, Zadad of the bible has been known as Sangatati. I don’t know how the former evolved to the latter. He is a renowned nursery school teacher in our village. So brother Zadad, be nice to children to sustain that honour and thou shall inherit the heart of a chicken dancing in hot soup.
Elizabeth shall change to Lisapweti or Sapeti and my friend Alex shall have to embrace the name Waleso. Lisapweti and Waleso are a married couple known to ruthlessly box each other every night. The winner is yet to be known because today, the man may be the one to ask for help and the following day, the wife would be heard screaming as if the hubby had decided to offer her a ticket to hell. This is to say that none of them has ever been successful to win two consecutive night matches. So my friends Liz and Alex, make sure you stand a distance apart during introduction lest you be confused to the former couple and receive chicken legs on your plates.
Aggrey through metamorphosis shall change to Ekuri. Ekuri is man with eleven kids but still rears doves and rabbits in his house. In addition, he is speculated to be a night Kemboi. This is to say that his steeplechase medals are won in the night when people are asleep. Therefore make sure that you lay it plain before my kin that you took a course in fishing and communicate in a manner likely to suggest that you slumber for more than twelve consecutive hours every night thus can’t be found Kemboing at wee hours.
My learned friend Gabriel shall have to carry the tag Kavurierie. This name belongs to one man who is good at eating roasted termites, squirrels and locusts. He is also a guru in frying mushroom,  my mum’s favourite cuisine. If you therefore want mum Alice never to forget you, in the course of shaking her hand just mention the word obuoba, which is the luhya name for mushroom and the  chicken drumstick shall definitely be put on your plate.
Michael doesn’t exist in our place but we have Mukeli instead. This is a man who has no children but is bringing up nine kids thinking that they are his. He is perceived to be impotent. Rumours from not very reliable sources state that his wife Perita whom I presume to be Brenda decided to outsource kids without him knowing. Be sure villagers shall broaden their smiles while giving you a handshake because they believe that most if not all Mukelis are… (ok. I dont want to call them imbeciles) but are close to that while Peritas are geniuses under the sun! Be assured that chicken breasts are waiting for you Brenda and intestines set aside for any Mukeli that shall accompany you.
Suwumoni aka Simon is our village pastor but is known to call newborn children either Simon or Lillian (his wife’s name) if the kid is a male or female in that order. Anyway, they deserve chicken breasts for the good job of disseminating the gospel to the villagers. 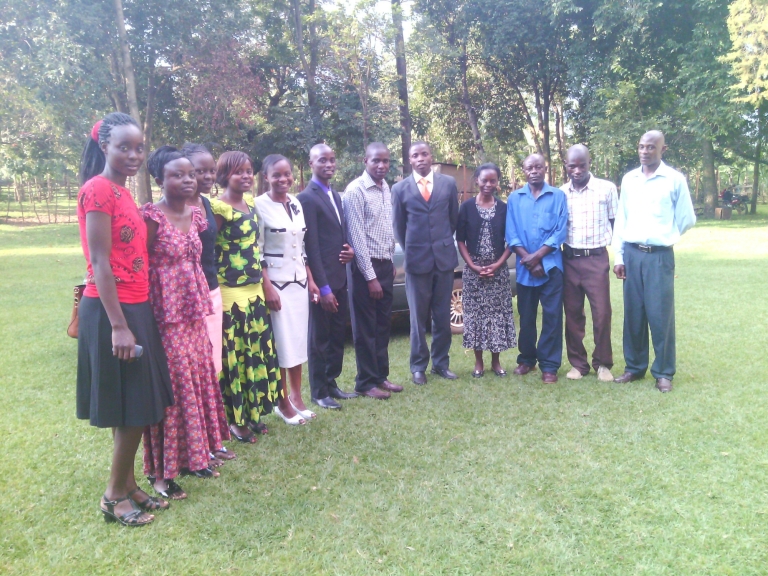 Apparently, I have been wondering why the so called totcom parents have chosen digital names for their kids. These names came into existence after the promulgation of Man Unye. Apart from her grandchild named BVR Wepukhulu whom she calls Pifiyari, another one was just added to the numbers going with the name Sillandro. This makes mummy wonder how one can decide to call somebody Sirandarro which denotes a rack made of wood where utensils are put to sun-dry after they’ve been cleaned. Another one is called Sikaraveti, which is a luhya term for a three legged chair though I am informed that the warichino name is Scarlett. All these tichito names shall not be successful in evading plates loaded with chicken legs, necks and wings.
Lastly, anyone with the name Protus shall be received like a king. This is because this name sounds like Obama’s if you consider letter ‘r ‘ to be silent. Therefore I appeal to you, dear friends, to come along with somebody in the name of Burotasi. He shall be blessed with the unborn eggs. I mean eggs found in the stomach of the chicken that was just preparing itself to offload them before the slaughterer saw it fit to replace vegetables on the table with the its flesh!

One thought on “In Kuku Land: Your Name, Your Saviour”